A few weeks ago, we visited one of Frank Lloyd Wright's many masterpieces, Falling Water, the Kaufman house in Mill Run PA.  Wow! What an amazingly beautiful place!

Organic architecture was Wright's first principles,  a coherent integration of the whole experience; the the context of site and structure as one.   This unity is manifested in the combination of natural stone and other elements of the site with man made materials in a many ways at Falling Water.  For example, the fireplace, pictured at right, is built around the stone outcroppings already present.

The idea of holism with nature applies to all human endeavor.   We are, after all, animals who inhabit the natural world.  Art of the Future is particularly interested in the application of this design principle to organizations of all types.   Organizations could thrive by relishing the life that sustains them.  They could work with that life energy to create contexts that are flowing with positive energy in a completely fluid and natural way.  When people are truly at home in their organizational contexts, they are both deeply relaxed and highly energetic.  They are engaged. Their organizations are life-sustaining.

Teresa Amabile and Steven Kramer have recently published  powerful and rigorous research on the deep satisfaction of hard work:  "As long as workers experience their labor as meaningful, progress is often followed by joy and excitement about the work. 'This time it looks good! I feel more positive about this project and my work than I’ve felt in a long time,' one programmer wrote after she’d completed a small but difficult task.  This kind of rich inner work life improves performance, which further supports inner work life — a positive reinforcing loop."  Note the use of the word "joy" in this description: when people love their jobs, they're having fun.  They're like kids at a swimming hole.  Nobody has to tell them how to act.  They know what to do...and they'll take real risks with true gusto.

Unfortunately, most organizations are not life-sustaining.  In fact, it's arguable that a majority of people hate their jobs.  The Gallup-Healthways Well-Being Index, which has been polling 1,000 Americans a day on how they're doing since January 2008, gives us Americans a very troubling "D" grade on happiness.  Quoting Amabile and Kramer, "People of all ages, and across income levels, are unhappy with their supervisors, apathetic about their organizations and detached from what they do. And there’s no reason to think things will soon improve."  The social price tag is ENORMOUS! Estimates run as high as $300,000,000,000/year!"

It's not just people working in organizations who feel miserable.  Everyone interacting with a life draining organization is affected by its toxicity: its customers, its partners, the communities in which it operates, and, of course, nature, which has to accommodate a dead zone.

We experienced of the truth of this concept  recently at a shopping mall.  I was hunting for a New York Times to read over lunch.  Going into a Duane Reed, I asked two employees standing at the counter if I could buy a newspaper: "You get one of those from a news stand.  This is a pharmacy."  I pointed out that I was standing right next to an entire rack of chocolates and candies; so, the store carried more than medical items.  "Yeah, well, we don't know about that."  Being already in the store, I bought something else I needed and approach the counter to pay and check out.  The women were engaged in an extremely vulgar conversation about a third person they both knew and didn't like.  I was astonished that I was even hearing that kind of language in a work place.  They hardly looked up to make any eye contact with me as I handed them my credit card.  I didn't exist, and it was unpleasant. All I wanted to do was leave.

We turned next to Best Buy to find a land line telephone.  None of the three employees [again engaged in conversation amongst themselves] knew the stock and only one out of three could point in the general direction of telephones.  We found many types of phones with myriad distinctions in specifications and price points, so we sought help to make a choice.  Only a "phone specialist" could help and no one knew where to find him.  When we did get the specialist, it turned out that he didn't know the differences between the items and would we please wait while he spoke with his superiors.  He clearly didn't know where to start with his own inventory and we had to guide him through the options that were available to try to gain clarity on what  would best fit our needs.  Another experience we wished we weren't having. 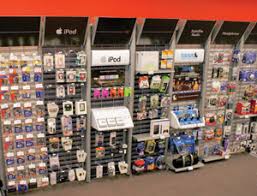 We decided that we needed to compare the phones at Best Buy with the ones on sale at a much smaller Radio Shack store a few doors down the way in the mall.  Two clerks were at the main counter.  We approached and described what we were looking for.  A young woman spoke right up, and "Sure, I can help you," and we started feeling pretty good.  She proceeded off to a direction in the store where there were no phones and had to come back to main counter to ask her co-worker, with a giggle, do you know where we keep the phones.  Things were not looking up.  We then did proceed to where the phones were and were again confronted with the problem of a sales assistant who had no idea how to help us find our best option and manifested a sort of detached boredom through the entire transaction, as though something much more interested was going to be happening on her cell phone just as fast as she could get back to it.  Again, we didn't get what we wanted substantively or emotionally.

Finally, like people who had been out on the dessert too long, we arrived at an Apple Store to ask a technical question about a couple of our products.  We were handled seamlessly from the moment of intake by a friendly young guy who not only was ready to set us up with an appointment with a technical specialist but who said, "While you're waiting on that, why not tell me what the problem is and maybe I can fix it," which he did in about 15 minutes, finally providing us with a moment of psychological completion after a series of frustrations. The transaction occurred in a bright and pleasant environment, didn't cost us anything and provided us with a nice connection to an assistant we'd be pleased to work with again.  It was the type of life affirming moment that a lot of people associate with their customer experience at Apple, and it was an example of how that trait contributes to the brand's popularity.

Apple's customer interface isn't perfect, and, in fact, the company has started using that horrid, scratchy muzak while you're on hold that drives us nuts. (The security firm, ADT, has made this torture into an absolute art form, by the way, requiring everyone making an incoming call to be rung out on an auric rack for a minimum of 13 minutes.)  We're hoping that this isn't a retreat from the sort of design integrity that was such a passion for Steve.  (And we sure do hope that someone at Apple is reading these comments and coming up with a fix!  It's an annoying problem, and Steve would bite your head off if he knew about it!)

But, in the main, Apple delivers a customer experience that is head and shoulder above everybody else.  And this adds tremendously to the obsession that customers have for this brand.  It's a phenomenon.

And we think the phenomenon goes beyond the sheer functionality and the beautiful look and feel of Apple's products.  We think that there is such a level of longing to interact with organizations that have a life sustaining quality that any organization that does is mobbed by people who have longed for something they couldn't name and just want to eat it up on those rare occasions when they find it.

Organizations like Apple have a lot in common with Elvis on any other superstar.  Because so few organizations are manifesting a high level of vitality, those that do are in extraordinarily high demand.  It's not that they are ultimately so different or that its people are so dramatically unique.  Rather, it is simply that a life positive climate has been established that encourages people to bring more of themselves into the organization and to construct an organizational strategy that makes it easy for employees, customers, and members of the local community to do so, by hiring extraordinarily diverse teams of talented people drawn from all different creeds, colors, nationality, appearance and sexual orientation, for example.

Many, if not most, people feel good coming to an Apple store because they are coming home, in a sense.  They are in an environment that sustains their life on many levels.

And that's great, but there's a definite down side.  Apple is one company and the staff at its stores are largely under the age of 30.  This company and these young men and women cannot be expected to pick up the slack for so many scores of thousands of life-draining organizations.  That's a sure recipe for burnout for Apple employees and the company as a whole.  (After all, look at what happened to The King.)

So what's the answer?  Lots and lot of organizations all over the world need to become life sustaining. (We've written a book with our ideas on how to do that.)  It is not the heroes that save society; it's the society that is constantly improving its standards of everyday organizational behavior that saves itself.


Posted by Michael Sales and Anika Savage at 1:35 AM No comments: