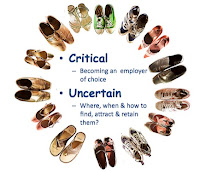 Art of the Future has made a number of presentations to CoreNet, an international network of corporate real estate professionals who oversee the design and corporate deployment of millions of square feet of owned and leased buildings and land. In a recent webinar, we discussed the way in which the need to attract and retain creative talent could play out in alternative scenarios.

The proposition that organizations face critical uncertainties is one of the key ideas we work with. A critical uncertainty is a driver that is very important to the success of the organization, but whose direction is uncertain. While it is clear that creative talent is critical to the well-being of organizations, it's not certain whether particular skills will be in short supply or whether there will be such a talent glut in the future that organizations will be able to pick and choose among a galaxy of stars. We looked at a range of data that might validate either conclusion.

In many instances, there is an "official" accepted view regarding critical uncertainties: there's either going to be a shortage or a glut or some combination of the two, end of story. Other views tend to be driven under ground, deligitimized. Michael recalls vividly having purchased a Datsun in 1973 shortly before the oil embargo and driving around in his new car listening to the CEO of General Motors declare that "Americans will never buy small cars. We just aren't the sort of people who are willing to jam ourselves into one of those vehicles." This was not a person, nor a company, that wanted to hear from a guy who loved America but just didn't want to own a gas guzzler.

Of course, life doesn't actually turns out the way we'd planned or anticipated. The future may go in one direction, change course, wobble around, bee line the opposite way, 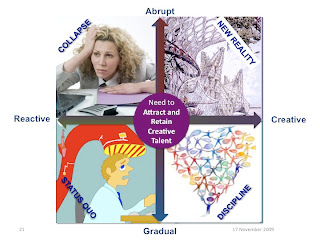 oscillate for a year or two, etc.. Life-sustaining organizations explore strategies that will enable them to be nimble in the face of whatever happens. How do organizations position themselves for a scenario where there will be a high demand for creative employees in short supply while at the same time being able to take full advantage of a potential buyer's market for such talent?

The participants in the webinar used this framework for considering the future to share their views on how the need for creative talent would play out in the future and did a little toward developing a set of the scenarios from which strategies could be built. That is, they did some anticipatory thinking about what forces, e.g., the power of women at work and in society more generally, might influence the need to attract and retain creative talent and, therefore, what sort of strategies the organization should adopt in light of those possibilities.

We believe that becoming a life-sustaining organization is a winning strategy regardless of how the future unfolds. While we have a great deal to say on this topic, essentially life-sustaining organizations are committed to their employees thriving and to the well-being of the natural environment. They want their members to feel free to bring their full range of skills and authentic selves to work. Life-sustaining organization recognize that all human systems are part of the larger living system of our planet. Having this orientation toward being a living system goes a long way toward becoming the employer of choice. If there's a talent glut, life-sustaining organizations will benefit from a demonstrated commitment to people and planet; they will attract the best of the best. If those with talent are able to name their terms, they are still much more likely to choose an organization that is used to having people like them around--one that already has a well-established reputation for working with deeply talented people--than one that is just getting used to having high autonomy creatives around for the first time.
Posted by Michael Sales and Anika Savage at 3:28 PM

I think the deployment of talent is very important to the success of the organization, in fact, it is critical that companies deploy talent in the right place at the right time.