Krugman is a professor at Princeton who won the Nobel for his work on global trade patterns, specifically challenging the classical theory of competitive advantage, which asserts that countries should concentrate on producing something that is distinctively particular to a regions, with facts that seem to demonstrate that trade is dominated by a few countries who all produce somewhat different versions of the same thing and do that well.

That is not, however, why his receipt of the award is being celebrated here. It is his work as a columnist for the New York Times that makes him special to us because he's had so much practice writing for the general public that one can actually understand what he has to say without having to earn another graduate degree! (To emphasize the importance of this point, let us note that we are also currently reading "Causal Layered Analysis: poststructuralism as method" in Metafuture.org, which--while it promises to be an important article--has more challenging words in its title than have ever been spoken to our current American President!)

Krugman's writings in The Times has severe critics, mostly because his work frequently reflect the perspective enunciated by the Democratic Party. However, as noted by his many fans like fellow Nobel laureate, Paul Samuelson, Krugman may be opinionated but, he sure has been right recently. He has been beating the drum to take the economic perils that have been unfolding in the US and worldwide over the course of the last year plus much more seriously than mainstream politicians and policy makers were willing to do. Even today Henry Paulson was describing the step of the "government owning a stake" in US banks, the quasi-nationalization that Krugman has been calling for, as "objectionable to most Americans, me included," but it certainly seems to be one of the steps that is needed to keep America, and the world as a totality, working.

Krugman has the ability to reduce complex conditions to their simplest terms, as he did in the column published on the day that he was awarded his Nobel laureate:

"What is the nature of the crisis? The details can be insanely complex, but the basics are fairly simple. The bursting of the housing bubble has led to large losses for anyone who bought assets backed by mortgage payments; these losses have left many financial institutions with too much debt and too little capital to provide the credit the economy needs; troubled financial institutions have tried to meet their debts and increase their capital by selling assets, but this has driven asset prices down, reducing their capital even further. What can be done to stem the crisis?... The natural thing to do, then — and the solution adopted in many previous financial crises — is to deal with the problem of inadequate financial capital by having governments provide financial institutions with more capital in return for a share of ownership. "

Here's our Structural Dynamic way of capturing that description: 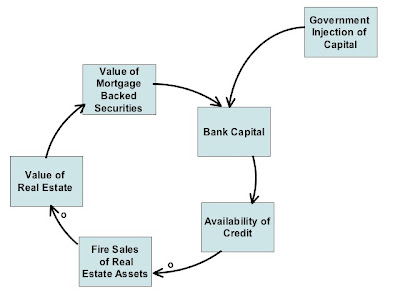 This is a troubling time when the policy makers who have been responsible for steering the American economy and, therefore, exerting tremendous influence over the world economy have been profoundly wrong. If Krugman doesn't claim to understand what the precise solutions are, there is certainly no way that we do either. But, we certainly seem to need more transparency and conversation about options and less screaming by people who claim to know something that they do not. It is difficult to reflect and analyze when worry demands action. Yet, wisdom requires us to understand what has happened to us before we rush off with too many fixes.

Me, I hate this way of thinking. I'm losing money every day. Like a bad dream, I want it to be over. But, unfortunately, I guess I get to be one of the grownups in this situation, just like Krugman. This is an era in which we all have a chance to be grownups, people who resist the blandishments and anxieties of the moment to make good choices for the long term.
Posted by Michael Sales and Anika Savage at 7:24 AM No comments: