Michael and Anika have been members of the Society for Organizational Learning pretty much since its founding by Peter Senge of MIT and other colleagues in 1997.  SoL was created to advance the five disciplines of organizational learning advanced in Senge's book by that title.  These are:
SoL has affected many thousands of people since its founding.  The organization has been going through an extended transition over the last three years as a new legal framework has been established to support its revised mission of being a network of networks for those who want to understand and influence the dynamics of organizational and societal systems.  There are now 22 SoL entities around the world operating in a loose confederation in support of the five disciplines in all of their manifestations.

Michael recently became the co-chair of SoL, North America (SoL NA), one of the largest and most well-established of the SoL constellation.  Working with a set of talented and experienced colleagues --Carol Mase of Cairn Consulting, Stephen Gianotti of the Woodland Group Associates, Siraj Sirajuddin of TEMENOS, Frank Schneider, Manager Director of SoL NA, Deborah Reidy of Reidy Associates, and Mark Alpert, President of Pegasus Communications-- Michael has been involved in the re-booting of SoL designed to dramatically increase the level of dynamic engagement by the members in the Society's activities.

This new effort was formally launched by about 40 participants at the end of Pegasus' Systems Thinking in Action conference last month in Indianapolis.  Michael worked with Siraj and Carol, in particular, to design the Project Incubator specifically for this event.  The Incubator uses a modified Open Space technology to help participants identify high impact projects that will move them and the organizations and systems they care about ahead.  The objective of this particular Incubator was to use the energy, ideas and talent in the room to contribute to the priorities for SoL NA in 2013 and beyond by identifying high energy/high potential projects.

We used a strategy matrix for SoL NA developed out of a series of conversations with Peter Senge.

The left hand column identifies a set of domains of activity where SoL NA have expertise. Similarly, the themes across the top refer to particular types of organizational thought and consultation where SoL members have developed distinctive methodologies.  Here's a bit of an elaboration of each of the theme: 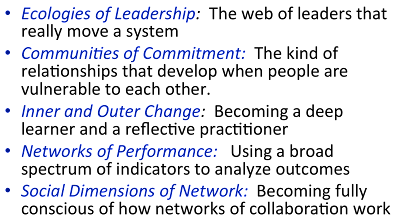 (Here's a link to a short edited video in which Peter presents his thinking about the matrix in response to a set of questions we asked.  It may take a little work to access the page entitled "Project Incubator".  Please let us know if you are having any difficulty.)

An exciting catalog of project ideas came out of this effort, some of which are already underway: 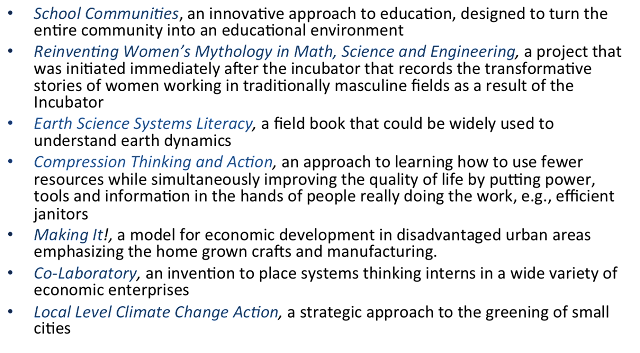 Each of these projects is going to be the subject of a Spotlight Conversation soon, in which the project leader will discuss the steps they have taken to move their project ahead and seek input and involvement from others in the SoL community.  Of course, it would be terrific for anyone reading this note who is not already a SoL member to join, participate in a call on a topic of interest, and take advantage of the benefits of membership.

This particular Incubator was focused on SoL NA's specific needs, but it also generated the robustness of the technology.  Initiating an Incubator clarifies organizational strategy and identifies specific action vehicles for realizing that policy in a way that engages the energy of associates in a completely organic fashion, i.e., people get excited about something that they really want to do which will also produce tremendous top line and bottom line results for the organization while doing really positive things in the world.

Call or write Michael (617-335-9776; michael@artofthefuture.com) to learn more about the Project Incubator and how it might be used in your organization or community.
Posted by Michael Sales and Anika Savage at 1:06 PM No comments:

Navigating the Narrows of a Complicated Future

This Christmas and Chanukah season we are thinking of the Exodus of the Jews from Egypt.  In Hebrew, the word for Egypt is mitzrayim, which means "narrows" or "straits" [probably derived from the narrow straits of the Nile in northern Egypt], a place of rapids and white water, requiring great skill to survive.  The narrows are both a physical and psychological reality.  We can be in "tight spots" because our funds and our luck are running out,  our opponents are closing in, or we are unable to see any possibilities beyond gloom and doom.

This era, like many others, is full of dangerous narrows and rapids.  Many things happen and many conditions arise for which we are completely unprepared.  We've got to scramble hard to get through.   Our increasingly interconnected world means that events that might have had relatively minor implications in the past now have the possibility of impinging upon our consciousness globally.

For example, hostilities between ethnicities and nationalities are becoming more complex as the 21st century progresses.  The "we" consciousness between groups is proliferating, and the "us" politics of community consciousness is being relegated to the sidelines.  These identity politics frequently play out with ruthless violence.
Nowhere are these tectonic forces of ethnic friction more on display than in the Middle East, a perennial hotspot of conflicting aspirations and interests.  Hostilities between Islamists,  minority religious groups, and secularists are poignantly on display in Egypt and Syria, where an intricate vortex of revolutionary and religious activity threatens to explode into permanent instability. 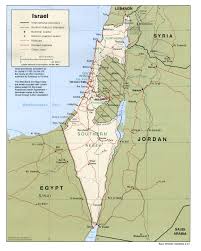 In the midst of this turmoil is Israel, which has its own complex political make up.  Of course, this small country is a pariah to many of its neighbors; quite a few remain in a formal state of war with the Jewish state.  It's a society that has to do a good job of navigating the narrows.
What can we learn from Israel? What enables it to keep going in spite of seemingly overwhelming odds?  A recent interview by Tom Friedman with retiring Israeli politician, Ehud Barak, pointed us toward an answer to this question.  With regard to the huge political forces, with deep roots, now playing out around Israel, particularly the rise of political Islam, Barak said...

'We have to learn to accept it and see both sides of it and try to make it better.  I am worried about our tendency to adopt a fatalistic, pessimistic perception of history.  Because, once you adopt it, you are relieved from the responsibility to see the better aspects and seize the opportunities when they arise...you lose sight of the opportunities and the will to seize opportunities. ...I know that you can’t say when leaders raise this kind of pessimism that it is all just invented.  It is not all invented, and you would be stupid if you did not look [at it] with open eyes.  But it is a major risk that you will not notice that you become enslaved by this pessimism in a way that will paralyze you from understanding that you can shape it.  The world is full of risks, but that doesn’t mean that you don’t have a responsibility to do something about it — within your limits and the limits of realism — and avoid self-fulfilling prophecies that are extremely dangerous here.' ”

This point applies to all of us living in and navigating through these challenging times.  In this era of polarization and economic stagnation in the West, there is much to be pessimistic about.  But, if pessimism is the totality of one's world view, there is a great risk that all sorts of other options and possibilities will go unnoticed.

Art of the Future believes that hope is always a possibility.  There is hope, for example, that the Arab Spring will not yield another round of authoritarianism but, rather, result in a recognition that listening closely to differing perspectives, will result in a deeper level of societal learning and functioning.  Regardless of the unsettling forces at work in the world - global warming, youth who lacking concentration or engagement, economic bankruptcy, etc., etc. -  there is always the possibility that things could turn out much more beautifully than ever imagined.

A recent video from Paraguay demonstrates the validity of this view.  In "The World Sends us Garbage and We Send Back Music," people with absolutely nothing materially - children finding food in landfills - are still able to create an orchestra!  I want to break down and cry about the power of the human spirit!  Like Patti Smith says, The People Have the Power and ain't nothin' goin' to turn 'em around once they get started!
Circling back to the religious nature of December, another piece of ancient Hebrew thinking about the possibilities that confront us all goes like this...

המצר קראתי י-ה ענני במרחב י-ה מן
"From the narrow I called out for God, God answered me with expansiveness."
Whatever our condition and the condition of the world that is our context, we have the possibility of greater consciousness, the prospect of moving from the narrows into the larger sea. 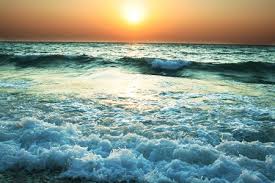 In 2013, may we choose expansiveness.
Best wishes for an abundant new year!
Posted by Michael Sales and Anika Savage at 3:43 PM 2 comments: